Twelve hours after the release of KOD, J. Cole shares the project’s first coinciding video (April 20). “ATM” receives the visual treatment, which was brought to life and directed by Cole himself alongside Scott Lazer. Jermaine uncovers America’s obsession with capitalism and its cogitating impact on his everyday decision making, as well as those around him.

The visual opens with King Cole donning a crown while riding over clouds on his throne with a group of perplexed children sitting on Actavis syrup bottles following his every move. The scene moves to the 33-year-old counting up stacks of cash before pivoting to him being locked up in a room made out of dollar bills.

Later, the clip shifts into Cole at a casino taking turns as the dealer and player running the blackjack table. Things get confusing when the Roc Nation signee freakishly rips off his right arm and leg, which is symbolic of the crippling effect capitalism has on American citizens. 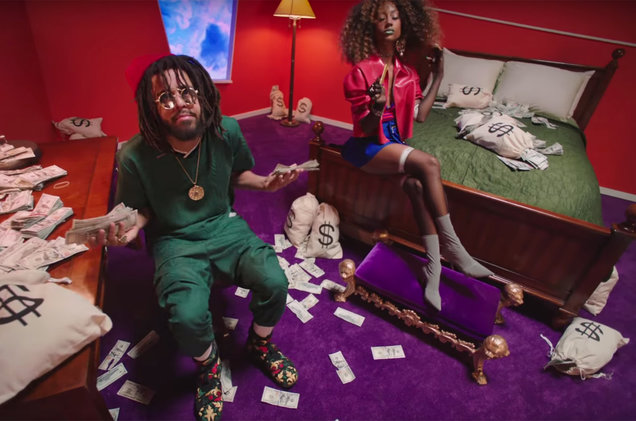 He finishes off the energetic track’s second verse expressing his stance against materialistic items. “Proceed with caution/ I heard if you chase it only results in/ A hole in your heart/ Fuck it, I take the whole cake and I won’t leave a portion/ It’s only an organ,” Cole shrewdly rhymes.

Check out the “ATM” video directed in part by J. Cole himself, below.

Enima shows us his flow in “DZ D’Amérique”