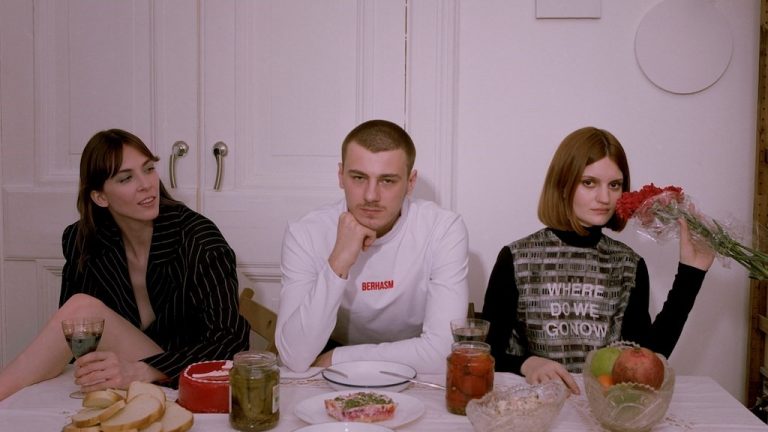 Since being founded by Georgian designer Beso Tura last year, art, fashion, and rave collective Berhasm has grown exponentially. So much so that the label’s latest collection was created with the idea of ‘the techno-family’ – complete with bouncing techno-baby – in mind.

Expanding on its offering of oversized t-shirts, hoodies, and sweatpants that were “ideal for the afterparty”, this time around the line-up includes Matrix-esque vinyl and faux fur coats, oversized blazers, and one stand-out dress emblazoned with the five red crosses of the Georgian flag, with many pieces bearing the motif ‘ТЕХНОМАТЬ’, which means ‘mother of techno’ if your Russian isn’t quite up to scratch (hi!).

According to Tura the idea came to him when he began thinking about the Soviet motherland monuments which overlook the cities of Tbilisi, Kiev, and Volgograd. “Back during the days of the USSR, the statues were symbols of Soviet power, and the figure of the mother is very important, particularly in Russia,” he explains. “With this collection, though, we decided to give the statues a new twist: we combined all three, replaced the weapons they held with water bottles, gave them sunglasses to to protect them from the daylight, and rendered them in bright, acid colours. These ‘rave mothers’ are a symbol of our power and freedom now.”

The accompanying campaign follows the techno-family in question – mum, dad, and baby, as well as a few of their equally rave-loving friends – as they get ready for a party. The images were shot by collective member, Ukrainian photographer Sasha Favorov.